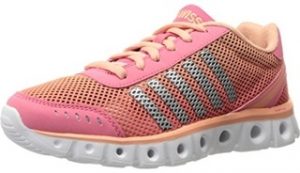 Ever the conspicuous consumer, I’m making a list of all the videos I want to buy. I want to build a collection and eventually devise my own work out rotations based on the videos.

In planning for future rotations, I realized that I need to consider yoga again for “rest” days. It was hard to find an instructor that I liked that had decent enough production quality. I finally settled on Sanela Osmanovic who has some videos free for Amazon Prime members. Woot! Her videos are about 20 minutes, just the preferred length for me. I like her calm and encouraging demeanor as a trainer. Of course, JM has her Yoga Meltdown and Yoga Inferno, but it’s a bit much for me and I need a gentler (re)introduction to Yoga.

During this week, I also decided to buy some Kettlebells and Paul Katami’s Ultimate Kettlebell Workouts for Beginners video and Sarah Lurie’s Iron Core Kettlebell set (more below). It was an impulse purchase! I’ve made a lot of stupid impulse buys, but I definitely count these as one of my better ones. I am excited to get going on these!

12/26/16: I kicked off with No More Trouble Zones and not the 30DS, although I was hoping to do both. I wasn’t as wiped out as I thought I’d be after NMTZ, but not as sore as I wanted to be either. I think those 3 days of doing the videos before it got too crazy at work really helped out in terms of keeping up. The first day of doing it, I was a mess. But now, though I am tired, I am not obliterated as I was that first Friday.

I had some errands to do this day, so it was a little hard to rationalize an additional workout (or easy to rationalize not doing it). Overall, it was a good workout, though I did modify a lot more than I wanted to. I mean, I wish I was able to do some of the moves, but my upper body and core is simply not that strong.

12/27/16: I did the BFBM today. It was a good workout as it is more of a cardio workout, whereas NMTZ is more of a strength/metabolic workout.

12/28/16: I did NMTZ again. At this time, I haven’t done 30DS Level 1 yet because I am finding that I prefer to do the longer workouts given that I have the time to do it and am tired enough afterwards that an additional 30 minutes of the 30DS might be overkill at this point.

12/29/16: BFBM again. I will be alternating this video and NMTZ for the remainder of this week. I do want to mention that my weight range is hovering about 129-131lbs right now (depending on when I weigh myself). I would like to get to 125lbs thereabouts in about 2 months.

I imagine that there’s going to be some muscle building as well, so if I see the fat going
away that I will be fine with that over the numbers on the scale.

12/30/16: NMTZ again and I am actually feeling sore! Part of it is due to having gained enough strength to do some of the moves for real, without modification and I am feeling it! It feels good. Things are happening and I am pleased with the direction I am going in.

I had no upper body strength at all, but now I can do some of the plank moves (though not for the entire 30 second duration). My core also sucked, but I do feel myself getting better and stronger. I really can’t wait until I get to where I want to be. I’m really excited!

One downside this week is that I am no longer going to bed as easily as before? By before, I mean earlier this week. I don’t know why. I am just having trouble falling asleep and that is
annoying me.

12/31/16: BFBM today. The workout was good. I feel great after it. I even rewarded myself with some chocolate covered raisins (exactly one serving, 120 calories). I kind of miss the sugar.

I ordered some cheapo cement filled kettlebells ($20 worth) and they arrived today! I am interested in getting started with kettlebells since I know JM has her Shred it with Weights that I am interested in. As I improve with KBs, I will replace them with nicer cast iron ones. I want to make sure I like it before I invest. 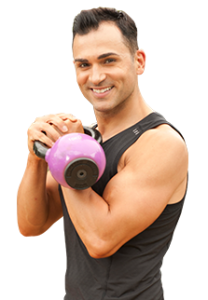 I finally did the 30 Day Shred, Level 1 video today because I needed a short workout to try out the kettlebells afterwards. Wow, after a week of NMTZ and BFBM, I am actually finding 30DS1 much easier to do!

As mentioned, I also did Paul Katami’s Ultimate Kettlebell Workouts for Beginners because I wanted to get my form right before attempting it JM’s Shred it with Weights. I will work on the Iron Core Kettlebell DVD during my kettlebell days. Yeah, I think I have kettlebell days now! I’ll probably be working on the beginner KB videos for a very long time to perfect my form, because I really don’t want to injure myself!

The first workout I did was the instructional one with 5lbs and I was so WIPED OUT after that. My arms feel like jello. I was dripping with sweat. I LOVE IT. Also, I really like Paul Katami’s training style! Much calmer than Jillian Michaels.

Note: As a reminder, I will be backdating the posts so that it follows in a sort of chronological order, although it is not the exact date as it occurred since various ideas happened a bit out of sequence.

Get Psyched to Workout!
Weekly Workout Recap: Soreness is Godliness